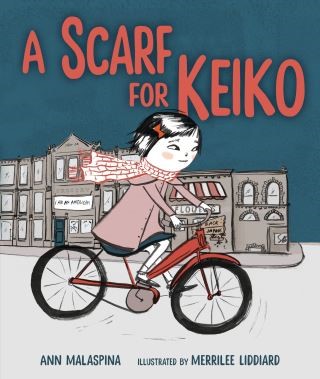 A Scarf for Keiko

It's 1942. Sam's class is knitting socks for soldiers and Sam is a terrible knitter. Keiko is a good knitter, but some kids at school don't want anything to do with her because the Japanese have bombed Pearl Harbor and her family is Japanese American. When Keiko's family is forced to move to a camp for Japanese Americans, can Sam find a way to demonstrate his friendship?

Ann Malaspina has written many books for children, including Touch the Sky: Alice Coachman, Olympic High Jumper and Finding Lincoln. She lives in New Jersey with her husband and two sons.

Merrilee Liddiard grew up in a home filled with delightful artistic chaos and ample creativity. She is known for her love of kids’ art design, toys and DIY crafts. Merrilee loves to travel, wander museums, sew, thrift, read and nap.