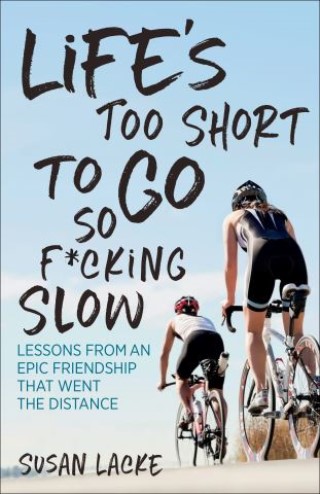 Life's Too Short to Go So F*cking Slow

Lessons from an Epic Friendship That Went the Distance

1. A well-written and touching story set amidst the triathlon culture.

2. Lacke is a beloved columnist for Triathlete and Competitor magazines.

3. Triathlon is one of the fastest-growing endurance sports. 3.6 million Americans participated in triathlon in 2014, a 19% increase from 2012.

Susan Lacke is a writer, college professor, and an adventure junkie who lives in Salt Lake City, Utah. She holds a doctorate in health education and a M.S. in family and community wellness. She is a featured columnist for Competitor and Triathlete magazines and her monthly columns resonate with readers of all levels because she writes often of ass chafing, getting lost in the woods, and being hungry all the damn time. Her writing has appeared in many national and regional publications including Women's Running, SUCCESS, and Salt Lake magazine.

She won The Bee storytelling competition in Salt Lake City, was selected as one of Arizona Foothills magazine's "Women Who Move the Valley", and has finished several Ironman and marathon races.