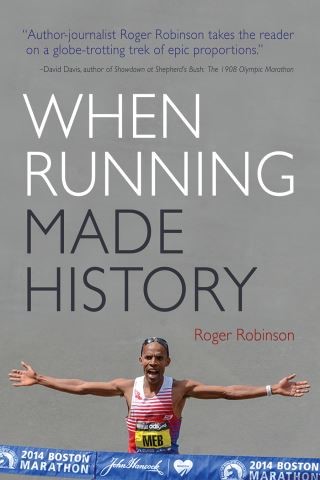 When Running Made History

Robinson takes readers on a globe-trotting tour that combines a historian’s in­sight with vivid personal memories going back to just after World War II. From experiencing the 1948 "Austerity Olympics" in London as a young spectator to working as a journalist in the Boston Marathon media center at the moment of the 2013 bombings, Robinson offers a fascinating first-person account of the tragic and triumphant moments that impacted the world and shaped the modern sport. He chronicles the beginnings of the American running boom, the emergence of women's running, the end of the old amateur rules, and the redefinition of aging for athletes and amateurs.

With an intimate perspective and insightful reporting, Robinson captures major historical events through the lens of running. He recounts running in Berlin at the time of German reunification in 1990, organizing a replacement track meet in New Zealand after the disastrous 2011 earthquake, and the tri­umph of Ethiopian athlete Abebe Bikila in the 1960 Olympics in Rome. As an avid runner, journalist, and fan, Robinson brings these global events to life and reveals the intimate and powerful ways in which running has intersected with recent history.