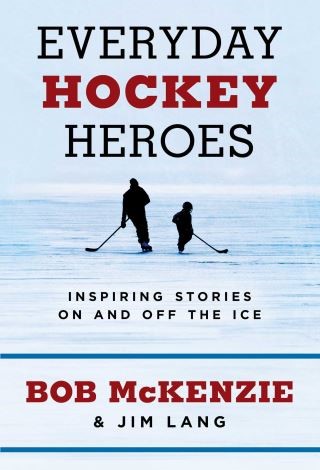 Inspiring Stories On and Off the Ice

An inspiring volume of stories about Canada’s most beloved sport—hockey—and the everyday heroes who embody the spirit of the game and help shape its future, from the pros who compete in NHL arenas to the dreamers and fans who play on backyard rinks.

What does hockey look like today in Canada? Who is changing the game? Canadian broadcasters Bob McKenzie and Jim Lang bring together players, from youth hockey to the NHL, and the people who support them to show us what hockey means to them.

Meet Philadelphia Flyer Wayne Simmonds and Paralympian gold medalist Greg Westlake, who wouldn’t be at the top of their sport without the never-ending support of their families and communities. See how they’re giving back to show young hockey hopefuls that anything is possible. Read about players like Ben Fanelli, who overcame catastrophic injury to keep playing the game he loved and is using his story as a platform to help others, or the renowned Canadian neurosurgeon Dr. Charles Tator, who is leading the charge to protect athletes from the dangers of brain trauma and concussion. From hockey commentators Andi Petrillo and Harnarayan Singh, who broke down barriers to be on air, to Karina Potvin, the youth hockey coach welcoming Syrian boys and girls to Canada by introducing them to our national pastime, these are the stories of everyday hockey heroes—those who defy the odds, advocate for inclusion, and champion the next generation of hockey.

From small-town rinks to big city arenas across the country, this collection celebrates everyone who loves our great game. Heartwarming and entertaining, Everyday Hockey Heroes is a must-read for every hockey fan.

Bob McKenzie: Bob McKenzie is a Canadian broadcaster, journalist, and author. Known as the TSN Hockey Insider, Bob has covered Canada’s favourite sport for forty years. He is the former editor-in-chief of The Hockey News, hockey columnist for the Toronto Star, and the author of three national bestsellers, including the first book in this series. He lives in Fenelon Falls, Ontario. Follow him on Twitter @TSNBobMcKenzie.Jim Lang is a Canadian sportscaster, journalist, and the co-author of hockey memoirs by Tie Domi, Max Domi, Wendel Clark, and Brian Berard, as well as Everyday Hockey Heroes with Bob McKenzie. He hosts The Jim Lang Show. He lives outside Toronto with his wife and kids. Follow him on Twitter @JimLangSports.