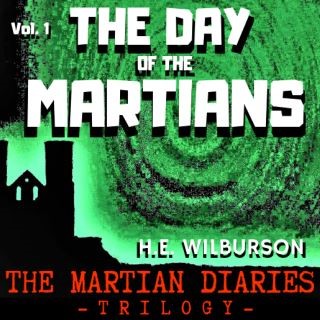 The Day Of The Martians: The War Of The Worlds Audio Drama Sequel. Martian Tripods Return To Earth In Volume 1 of The Martian Diaries
When an unopened Martian cylinder is discovered in the mountains of Wales in 1913, the people of Britain brace themselves for another alien invasion from Mars. Soon they learn the shocking news that the vengeance-seeking Martians and their invincible tripod fighting machines are once again destined for Earth. This time they are armed with a doomsday weapon, able to destroy bacteria and ultimately end all life on our planet. With time and hope running out fast for H.G. Wells' original characters, what on Earth can they do to survive and escape a new Martian apocalypse? The Day Of The Martians continues the iconic story of The War Of The Worlds in a fast, compelling and unmissable adventure, complete with original music. Expect the unexpected in this first volume of The Martian Diaries science fiction series.
'This was more than an audio book. This was, in many ways, a wonderfully executed tribute to H.G. Wells.' Readers Favorite