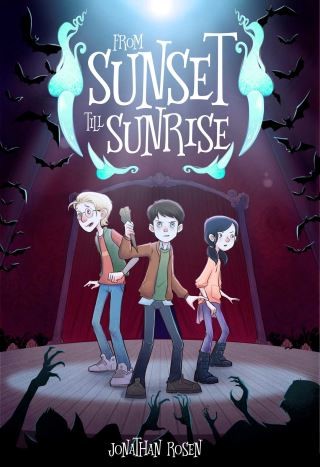 From Sunset Till Sunrise

Devin Dexter and his cousin Tommy just saved the city of Gravesend from the menace of magical, malicious Cuddle Bunnies brought to life by the warlock, Herb. But there’s no rest for the wicked, as a new mysterious neighbor moves in across the street. At night. With a coffin. Tommy immediately jumps to conclusions as he thinks this can only mean one thing: Vampires.

Devin isn’t so quick to believe, as he is struck by the neighbor’s daughter, a girl his age. Even though Tommy points out that they have never seen her during the day. Yet when she invites him to a dance at her school—the Nosfer Academy of Talented Understudies—how can Devin say no? Tommy, though, realizes that this is an opportunity. After tackling a wizard last winter, surely they can protect Gravesend from some measly vampires, right?

Jonathan Rosen: Jonathan Rosen is a transplanted New Yorker, who now lives with his family in sunny South Florida. He spends his “free” time being a volunteer coach and chauffeur for his three kids. Some of Jonathan’s fondest childhood memories are of discovering a really good book to dive into. His favorite of all time is Hitchhiker’s Guide to the Galaxy by Douglas Adams. He currently writes middle-grade, because his sense of humor is stuck in that age. Jonathan is proud to be half-Mexican and half-American, although neither country is really willing to accept responsibility.