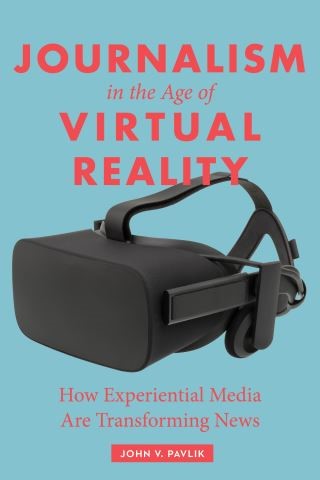 Journalism in the Age of Virtual Reality

How Experiential Media Are Transforming News

With the advent of the internet and handheld or wearable media systems that plunge the user into 360º video, augmented—or virtual reality—technology is changing how stories are told and created. In this book, John V. Pavlik argues that a new form of mediated communication has emerged: experiential news. Experiential media delivers not just news stories but also news experiences, in which the consumer engages news as a participant or virtual eyewitness in immersive, multisensory, and interactive narratives.

Pavlik describes and analyzes new tools and approaches that allow journalists to tell stories that go beyond text and image. He delves into developing forms such as virtual reality, haptic technologies, interactive documentaries, and drone media, presenting the principles of how to design and frame a story using these techniques. Pavlik warns that although experiential news can heighten user engagement and increase understanding, it may also fuel the transformation of fake news into artificial realities, and he discusses the standards of ethics and accuracy needed to build public trust in journalism in the age of virtual reality. Journalism in the Age of Virtual Reality offers important lessons for practitioners seeking to produce quality experiential news and those interested in the ethical considerations that experiential media raise for journalism and the public.