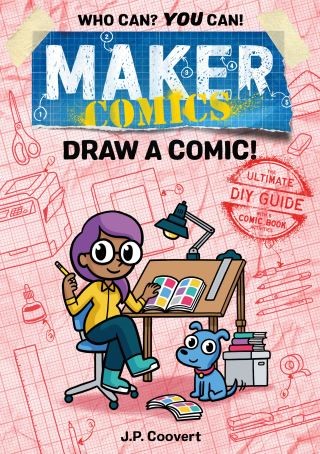 The International Comics Library is in a lot of trouble! If Maggie can’t come up with $500,000 in a week, Dr. Carl is going to bulldoze her grandfather’s library and turn it into a parking lot! To save the day, she’ll need all her comic drawing skills, the loyal library watchdog, and her new assistant (that’s you!).

With Maker Comics: Draw a Comic! you'll learn to create and print your own comics books! Follow these simple steps to sketch out your story ideas and ink a comic page. Learn which art supplies are best for drawing comics—you can use a pen, a brush, or even a computer! With the help of photocopy machine, you can even self-publish your own comics and share them with your friends!

In this book you will learn how to:
write a comic script
draw a comic strip
draw and print a one-page comic
create thumbnail sketches
pencil a comic
ink a comic
print and bind a multi-page comic

JP Coovert: JP Coovert lives in Cincinnati, Ohio, where he spends his time making as much rad artwork as possible. On the side, he co-runs a record and comic label called One Percent Press. He's written and drawn almost fifty comics, including his ongoing series, Simple Routines. JP Wants to create cool stuff forever, like illustrating every animal on the planet, creating a library full of kids books, and painting a mural on the moon!