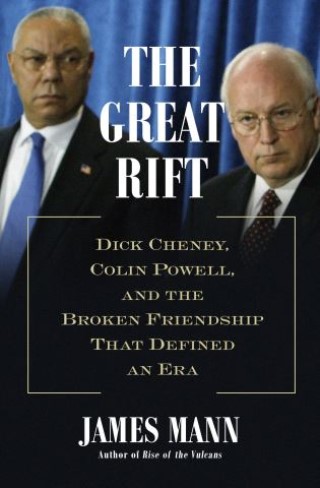 Dick Cheney, Colin Powell, and the Broken Friendship That Defined an Era

The Great Rift is a sweeping history of the intertwined careers of Dick Cheney and Colin Powell, whose rivalry and conflicting views of U.S. national security color our political debate to this day.

Dick Cheney and Colin Powell emerged on the national scene more than thirty years ago, and it is easy to forget that they were once allies. The two men collaborated closely in the successful American wars in Panama and Iraq during the presidency of George H. W. Bush--but from this pinnacle, conflicts of ideology and sensibility drove them apart. Returning to government service under George W. Bush in 2001, they (and their respective allies within the administration) fell into ever-deepening antagonism over the role America should play in a world marked by terrorism and other nontraditional threats.

In a wide-ranging, deeply researched, and dramatic narrative, James Mann explores each man’s biography and philosophical predispositions to show how and why this deep and permanent rupture occurred. Through dozens of original interviews and surprising revelations from presidential archives, he brings to life the very human story of how this influential friendship turned so sour and how the enmity of these two powerful men colored the way America acts in the world.

James Mann: James Mann is the author of several books on American politics and national security issues, including Rise of the Vulcans: The History of Bush’s War Cabinet and The Obamians: The Struggle Inside the White House to Redefine American Power. A longtime correspondent for the Los Angeles Times, he is currently a fellow in residence at the Johns Hopkins University School of Advanced International Studies. He lives in Washington, D.C.