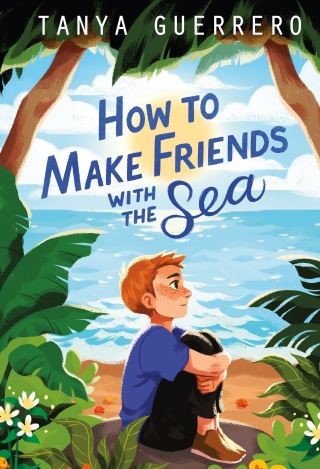 How to Make Friends with the Sea

Tanya Guerrero's How to Make Friends with the Sea is a middle grade debut novel set in the Philippines about a young boy's challenges with anxiety while his mother fosters an orphaned child with a facial anomaly.

He’s only twelve years old, but he’s lived in more countries than he can count. After his parents divorced, he and his mother have moved from place to place for years, never settling anywhere long enough to call it home. And along the way, Pablo has collected more and more fears: of dirt, of germs, and most of all, of the ocean.

Now they’re living in the Philippines, and his mother, a zoologist who works at a local wildlife refuge, is too busy saving animals to notice that Pablo might need saving, too. Then his mother takes in Chiqui, an orphaned girl with a cleft lip—and Pablo finds that through being strong for Chiqui, his own fears don’t seem so scary.

He might even find the courage to face his biggest fear of all…and learn how to make friends with the sea.

Tanya Guerrero: Tanya Guerrero is Filipino and Spanish by birth, but has been fortunate enough to call three countries home—the Philippines, Spain, and the United States. Currently, she lives in a shipping container home in the suburbs of Manila with her husband, daughter, and a menagerie of rescued cats and dogs. In her free time, she grows her own food, bakes bread, and reads. How to Make Friends with the Sea is her debut novel.