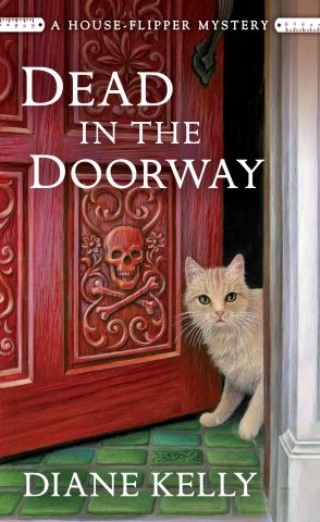 Dead in the Doorway

Dead in the Doorway is the second in a delightful cozy series from Diane Kelly set in Nashville—where the real estate market is to die for.

Whitney Whitaker has scored the perfect piece of real estate: a ramshackle white Colonial at the top of a hill with views of downtown Nashville. What more could a self-taught home-improvement maven and occasional house-flipper ask for? Ideally, the property of Whitney’s dreams would not have come with a dead body blocking the entrance to the foyer. But Whitney, always quick to take heavy-duty matters into her own hands, also happens to be a skilled amateur sleuth. So that helps.

AND SKELETONS IN THE CLOSET.

Who is this older woman—and how did her corpse end up at the bottom of the staircase of this locked, unoccupied house? That is what Whitney, along with the support of her wood-working cousin Buck, Detective Collin Flynn, and, of course, feline partner-in-crime Sawdust, intends to find out. Her friendly-neighbor investigation takes a sharp turn, however, when Whitney discovers that the house’s former owner was a gourmet baker whose secret recipe for peach pie was to die for—perhaps literally. Now it’s up to Whitney to learn the truth about what happened before she loses this killer real-estate deal . . . and the killer comes knocking at her door.

"Adorable…Whitney and Sawdust are a welcome addition to your home and bookshelf."—Kellye Garrett, Anthony, Agatha, and Lefty Award--winning author of the Hollywood Homicide series

Diane Kelly: Diane Kelly is a former state assistant attorney general and tax advisor who spent much of her career fighting, or inadvertently working for, white-collar criminals. She is also a proud graduate of the Mansfield, Texas Citizens Police Academy. The first book in Diane’s IRS Special Agent Tara Holloway series, Death, Taxes, and a French Manicure, received a Romance Writers of America Golden Heart Award. Book #2, Death, Taxes, and a Skinny No-Whip Latte, won a Reviewers Choice award. Diane has combined her fascination with law enforcement and her love of animals in her K-9 cop Paw Enforcement series.