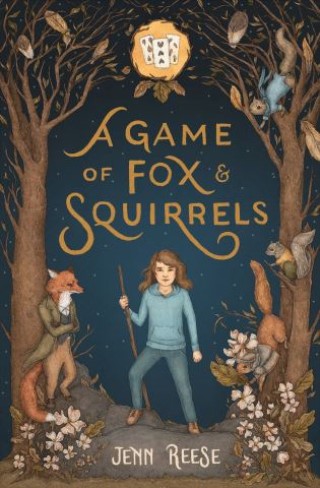 A Game of Fox & Squirrels

"Brings to life, viscerally, what it is like to live in fear of abuse—even after the abuse itself is over. But there is magic here too, and the promise of a better future that comes with learning to let people who care about you into your world." —Alan Gratz, New York Times-bestselling author of Refugee

"Magically creative and deeply honest, A Game of Fox & Squirrels merges games and grimness in a fantasy tale that tells the truth." —Elana K. Arnold, Printz Honor-winning author of Damsel and A Boy Called Bat

After an incident shatters their family, eleven-year old Samantha and her older sister Caitlin are sent to live in rural Oregon with an aunt they've never met. Sam wants nothing more than to go back to the way things were… before she spoke up about their father's anger.

When Aunt Vicky gives Sam a mysterious card game called "A Game of Fox & Squirrels," Sam falls in love with the animal characters, especially the charming trickster fox, Ashander. Then one day Ashander shows up in Sam’s room and offers her an adventure and a promise: find the Golden Acorn, and Sam can have anything she desires.

But the fox is hiding rules that Sam isn't prepared for, and her new home feels more tempting than she'd ever expected. As Sam is swept up in the dangerous quest, the line between magic and reality grows thin. If she makes the wrong move, she'll lose far more than just a game.

Perfect for fans of Barbara O'Connor, Lauren Wolk, and Ali Benjamin, A Game of Fox & Squirrels is a stunning, heartbreaking novel about a girl who finds the light in the darkness... and ultimately discovers the true meaning of home.

Jenn Reese: Jenn Reese writes speculative fiction for readers of all ages. Her first novel, Above World, was a finalist for the 2012 Andre Norton Award for Young Adult Science Fiction and Fantasy. She lives in Portland, Oregon, where she revels in the rain, plays too many video games, and works as a freelance graphic designer.