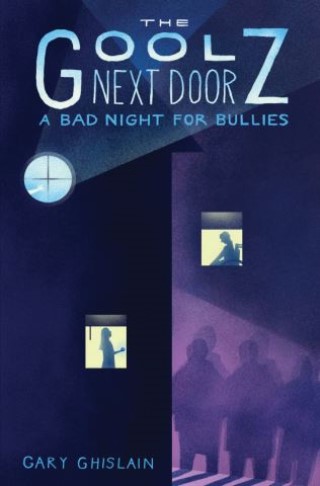 A Bad Night for Bullies

For fans of Goosebumps and other young horror titles, here is the first book of The Goolz Next Door series. When horror novelist Frank Goolz and his daughters, Ilona and Suzie, move next door, twelve-year-old Harold is only hoping to make exciting new friends. But he soon learns that Frank's books are actually based on real-life paranormal adventures. Suddenly a gift from Ilona seems much more dangerous than he ever imagined. Could it be fulfilling his darkest wishes?

Twelve-year-old Harold Bell lives a pretty normal life in his little seaside town. He fills his days with reading books, cruising down the boardwalk, and--unfortunately--trying to stay off the radar of Alex Hewitt and his pack of goons who can't resist bullying a boy in a wheelchair. But everything changes when famous horror novelist Frank Goolz moves next door with his daughters--beautiful, fierce Ilona and her troublemaking little sister, Suzie. Harold soon learns that life with the Goolz is never quiet and it's definitely not normal. Frank's novels are, in fact, based on his family's real-life paranormal adventures. At their home, lights flash inexplicably, objects move on their own, and grotesque specters appear in the attic. When Ilona gives Harold "the stone of the dead," he knows there's no going back. The stone can make things happen, but its powers can't be controlled. Bullies start vanishing, and it seems to be the work of a terrifying ghost who has attached herself to Harold. Could Harold unknowingly be causing the stone to fulfill his own darkest wishes?

Gary Ghislain: Gary Ghislain is the author of How I Stole Johnny Depp's Alien Girlfriend and three self-published YA novels. He lives in Antibes, France. Visit garyghislain.blogspot.com.