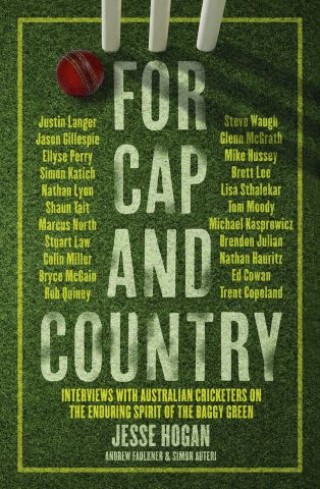 For Cap and Country

The personal stories behind one of Australia's most beloved sporting icons - the baggy green.

Australian Test players, past and present, open up about the road from their backyards to the baggy green.

Breathe in the mowed grass and linseed oil as they take their first steps to glory. Share with them the euphoria of their cap presentations. Immerse yourself in the wonder of Test triumphs and the despair of being dropped form the team. In sharing the players' stories - and disclosing how treasured Australian caps are kept under lock and key, in dank cupboards and stuffed in undies drawers - Jesse Hogan takes you inside their lounge rooms as well as cricket's dressing rooms. Their stories contain salutary lessons for the game's future. As such, this is a conversation about Australian cricket as much as it is a chat with its best players. And at its heart is the unifying force of the cap, under which all players are equals, no matter if they've played 168 Tests like Steve Waugh, or one like Bryce McGain.

What began as a passion project for sports journalist Jesse Hogan and cricket agent Simon Auteri in 2015 - to interview Australian cricketers, past and present, on the significance of gaining their Test spots - became a story about the spirit of cricket and its power to bring us together.

Just two weeks before the first draft was completed, tragedy struck. At the age of 33, Jesse Hogan suffered a devastating stroke that left him unable to speak, write or even walk. Following intensive rehabilitation and with immense support, Jesse made it back and finished the book with the help of fellow journalist Andrew Faulkner.

For Cap and Country and its publication is about the importance of generosity, sportsmanship, perseverance and community to help us achieve our goals in life as much as in sport. Now cricket tragics like Jesse can finally enjoy these stories too.

Jesse Hogan: Jesse Hogan became a reporter at The Age in 2004, and was part of its sports department from 2008. He reported on AFL and soccer, but his primary focus was on cricket and he covered a number of the Australian team's overseas tours, including the 2011 World Cup.