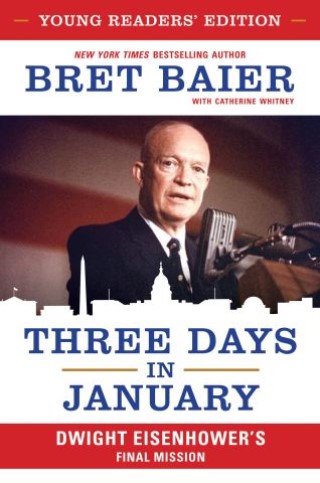 In January 1961, three days before President Dwight D. Eisenhower passed the torch to John F. Kennedy, the president had one final mission.

In the young readers’ edition of his New York Times bestselling book, Fox News anchor Bret Baier examines the historic transition and Eisenhower’s last chance to lead the country he loved through his legendary farewell address and his personal appeals to Kennedy.

Baier paints a vivid picture of the contrasts between old and new at the beginning of a decisive decade in American history. Eisenhower and Kennedy were very different men. Eisenhower, at seventy, was an elder statesman, a five-star Army general during WWII, and one of the most popular Republican presidents of the past century. Kennedy, a forty-three-year-old Democrat, had captured the nation’s attention with his energy and youth, but was inexperienced.

Eisenhower believed he had hard-won knowledge to pass on to his successor, but he didn’t know if Kennedy would listen. It was Eisenhower’s final mission as president to leave the new president, and the country, with the lessons he had learned and guidance for a direction forward.

Meticulously researched, broad in scope, and full of timely insights—as well as historic photographs—this edition will enable young readers to experience a piece of “living history” and will inspire a deeper understanding of the pivotal moments that forged the next seventy-five years.