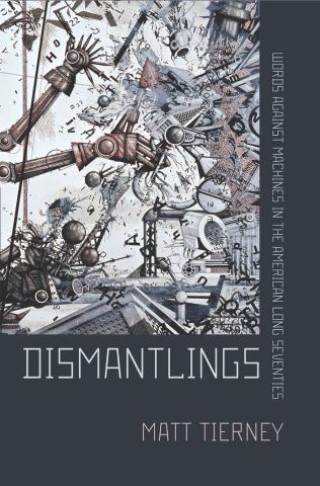 Words against Machines in the American Long Seventies

"For the master's tools," the poet Audre Lorde wrote, "will never dismantle the master's house." Dismantlings is a study of literary, political, and philosophical critiques of the utopian claims about technology in the Long Seventies, the decade and a half before 1980. Following Alice Hilton's 1963 admonition that the coming years would bring humanity to a crossroads—"machines for HUMAN BEINGS or human beings for THE MACHINE"—Matt Tierney explores wide-ranging ideas from science fiction, avant-garde literatures, feminist and anti-racist activism, and indigenous eco-philosophy that may yet challenge machines of war, control, and oppression.

Dismantlings opposes the language of technological idealism with radical thought of the Long Seventies, from Lorde and Hilton to Samuel R. Delany and Ursula K. Le Guin to Huey P. Newton, John Mohawk, and many others. This counter-lexicon retrieves seven terms for the contemporary critique of technology: Luddism, a verbal and material combat against exploitative machines;communion, a kind of togetherness that stands apart from communication networks; cyberculture, a historical conjunction of automation with racist and militarist machines; distortion, a transformative mode of reading and writing; revolutionary suicide, a willful submission to the risk of political engagement; liberation technology, a synthesis of appropriate technology and liberation theology; and thanatopography, a mapping of planetary technological ethics after Auschwitz and Hiroshima. Dismantlings restores revolutionary language of the radical Long Seventies for reuse in the digital present against emergent technologies of exploitation, subjugation, and death.