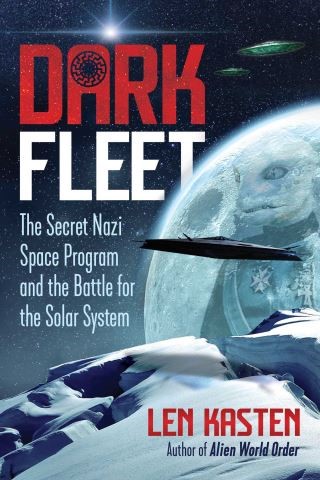 Reveals the Nazi-Reptilian infiltration of the U.S. government, their secret space program, and their slave colonies throughout the solar system

• Details “Operation Paperclip,” which enabled Nazis and their Reptilian partners to infiltrate the U.S. military-industrial complex, including NASA and the CIA

• Reveals their interstellar space ports in Antarctica and on Mars, their base on the Moon, and their alien technologies, including nano-technology, antigravity propulsion, mass mind control, and hyperdimensional teleportation capabilities

• Shares testimonies from American and British “supersoldiers” who participated in the “20 and Back” age-regression programs, revealing advanced human technology and our Space Armada that constitutes a counter-balance to the Nazi Dark Fleet

The Nazis did not really lose World War II. They made it appear that way in order to divert attention from the alliance between the Fourth Reich and the race of aliens known as the Reptilians--an ancient galactic civilization obsessed with conquest and domination. After the German surrender in 1945, the Nazi-Reptilian alliance infiltrated the U.S. military-industrial complex. Through “Operation Paperclip,” the Nazis and Reptilians removed their political opponents, such as the Kennedys, and moved into policy-making positions in post-war America, infiltrating aerospace companies, banking, media, and the U.S. government, including NASA and the CIA. But their real target was not the United States--it was the solar system.

As Len Kasten reveals in startling detail--including revelations of antigravity propulsion technology, alien techniques of mass mind control, and hyperdimensional teleportation capabilities--the Nazi-Reptilian alliance used their newfound power, wealth, and influence to launch a Secret Space Program with interstellar spaceports in Antarctica and on Mars as well as an eleven-story base of operations on the Moon. They commenced mining and manufacturing operations on Mars and Ceres, forming colonies there and elsewhere in the solar system. And, most shocking, they have used thousands of human slaves, easily transported in their spaceships, for both work and sexual exploitation.

Sharing testimonies from American and British “supersoldiers” who participated in the “20 and Back” age-regression programs, Kasten reveals the various forces inside and outside government that are resisting the Nazis and thwarting Reptilian attempts to achieve total dominance of the planet and the solar system. The U.S.-led Secret Space Program has its own fleet of spaceships, the Solar Warden Space Armada, which patrols the edges of the solar system and poses a growing threat to the Nazi Dark Fleet.

Len Kasten: Len Kasten is a UFO researcher and freelance writer. He intensively studied the Edgar Cayce Readings at the A.R.E. in Virginia Beach and has been a lifelong devotee of astrology and theosophy. He is a former member of the National Investigations Committee on Aerial Phenomena (NICAP) and the Mutual UFO Network (MUFON), and he is the president of the American Philosopher Society. He has been a feature writer, with more than 50 published articles, for Atlantis Rising magazine. He lives in Casa Grande, Arizona.