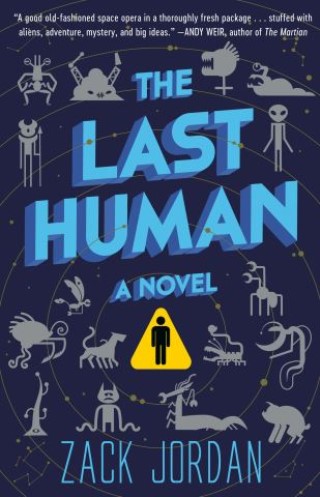 The last human in the universe must battle unfathomable alien intelligences—and confront the truth about humanity—in this ambitious, galaxy-spanning debut

“A good old-fashioned space opera in a thoroughly fresh package.”—Andy Weir, author of The Martian

“Big ideas and believable science amid a roller-coaster ride of aliens, AI, superintelligence, and the future of humanity.”—Dennis E. Taylor, author of We Are Legion

Most days, Sarya doesn’t feel like the most terrifying creature in the galaxy. Most days, she’s got other things on her mind. Like hiding her identity among the hundreds of alien species roaming the corridors of Watertower Station. Or making sure her adoptive mother doesn’t casually eviscerate one of their neighbors. Again.

And most days, she can almost accept that she’ll never know the truth—that she’ll never know why humanity was deemed too dangerous to exist. Or whether she really is—impossibly—the lone survivor of a species destroyed a millennium ago. That is, until an encounter with a bounty hunter and a miles-long kinetic projectile leaves her life and her perspective shattered.

Thrown into the universe at the helm of a stolen ship—with the dubious assistance of a rebellious spacesuit, an android death enthusiast on his sixtieth lifetime, and a ball of fluff with an IQ in the thousands—Sarya begins to uncover an impossible truth. What if humanity’s death and her own existence are simply two moves in a demented cosmic game, one played out by vast alien intellects? Stranger still, what if these mad gods are offering Sarya a seat at their table—and a second chance for humanity?

The Last Human is a sneakily brilliant, gleefully oddball space-opera debut—a masterful play on perspective, intelligence, and free will, wrapped in a rollicking journey through a strange and crowded galaxy.

Zack Jordan: Zack Jordan is a compulsive learner and creator. He holds half an art degree, two thirds of a music degree, and about a quarter of a philosophy degree. He’s worked on projects for FEMA, the U.S. Army, and the Department of Defense, none of which elevated his security clearance. He was a designer on several video games including World of Tanks and the F.E.A.R. series, but he’s more proud of the indie games and music albums he’s released under the name U.S. Killbotics. He lives in Chicago with his wife Tara, and spends his evenings playing various Super Mario games with their two daughters, London and Brooklyn.