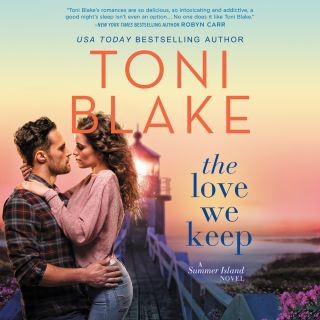 The Love We Keep

Toni Blake returns with the most emotional, tender novel yet in her enchanting Summer Island series.

Suzanne Quinlan has been through a lot lately, so nothing sounds better than a peaceful winter in her cozy cottage on Summer Island. The last thing she wants is a massive lifestyle adjustment—especially when it comes in the form of an injured Zack Sheppard, who is sullen, angry and completely dependent on her.

Zack values his independence above all else. But when he falls down his icy steps, he finds himself with a serious leg injury and in need of round-the-clock care. The only person available to help is his ex’s best friend, Suzanne. It doesn’t hurt that Suzanne is far more attractive than he ever realized, but he’s never been one to settle, and he sure isn’t going to start now.

As Suzanne and Zack grow closer, they both realize they’re in this thing more deeply than they ever thought, and it’s started to cause tension in their small, close-knit community, too. Will Zack be able to commit this time, and will Suzanne be able to trust him? One thing is certain: come spring, the lives and loves of Summer Island will never be the same.

Toni Blake: USA Today bestselling author Toni Blake's love of writing began when she won an essay contest in the fifth grade. Since then, she has written over twenty contemporary romance novels. Her books have received the National Readers' Choice Award, the Booksellers' Best Award, her work has been excerpted in Cosmopolitan, and she has been nominated for a RITA Award. Toni lives with her husband in Northern Kentucky.