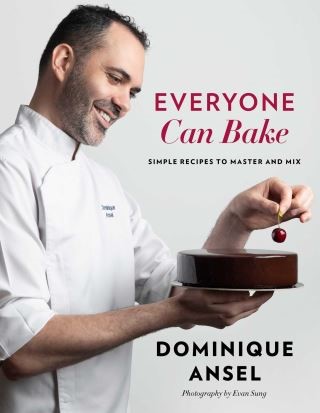 Simple Recipes to Master and Mix

Named one of the best cookbooks of the season by The New York Times, Chowhound, Eater, Food & Wine, Forbes, and more.

Dominique Ansel is the creator of beautiful, innovative, and delicious desserts, from the Frozen S’More to the Cronut®, the croissant-doughnut hybrid that took the world by storm. He has been called the world’s best pastry chef. But this wasn’t always the case.

Raised in a large, working-class family in rural France, Ansel could not afford college and instead began work as a baker’s apprentice at age sixteen. There, he learned the basics—how to make tender chocolate cakes, silky custards, buttery shortbread, and more.

Ansel shares these essential, go-to recipes for the first time. With easy-to-follow instructions and kitchen tips, home cooks can master the building-blocks of desserts. These crucial components can be mixed in a variety of ways, and Ansel will show you how: his vanilla tart shell can be rolled out and stamped into cookies; shaped and filled with lemon curd; or even crumbled into a topping for ice cream.

This cookbook will inspire beginners and experienced home cooks alike to bake as imaginatively as Ansel himself.

Dominique Ansel: Dominique Ansel, a James Beard Award–winning Pastry Chef, is the chef and owner of eponymous bakeries in New York, London, and Los Angeles, as well as his first-ever restaurant in Los Angeles. Ansel has been responsible for creating some of the most celebrated pastries in the world, including: the Cronut® (named one of TIME Magazine’s “25 Best inventions of 2013”), The Cookie Shot, Frozen S’more, Blossoming Hot Chocolate, and many more. He was named the World’s Best Pastry Chef in 2017 by the World’s Best Restaurants awards. Food & Wine has called him a “Culinary Van Gogh” while the New York Post coined him “the Willy Wonka of New York.” He was also named one of Business Insider’s “Most Innovative People Under 40,” one of Crain’s “40 under 40,” and was bestowed the prestigious l’Ordre du Mérite Agricole, France’s second highest honor.