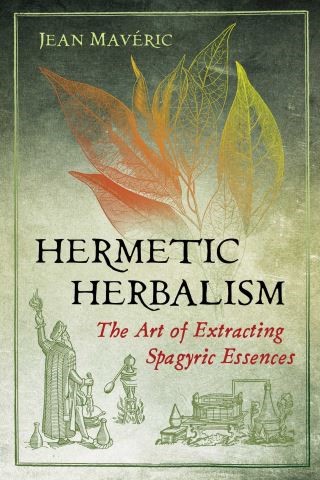 The Art of Extracting Spagyric Essences

• Includes a large collection of recipes for spagyric medicines and quintessences, with detailed step-by-step instructions, adapted from celebrated spagyrists such as Paracelsus, Pseudo-Lull, Philipp Ulstad, and Nicaise Le Fèvre

• Provides botanical and medicinal classifications of over 600 plant species along with their astral natures, elemental qualities, and planetary and zodiacal signatures

First published in French in 1911, this practical guide to the art of spagyrics begins by outlining the ancient yet often forgotten Hermetic foundations of herbalism. Author Jean Mavéric provides botanical and medicinal classifications of over 600 plant species along with an in-depth study of their astral natures, elemental qualities, and planetary and zodiacal signatures as well as practical advice on the appropriate times to harvest plants and administer herbal remedies and quintessences.

Reviewing the general principles and procedures of premodern chemistry, Mavéric then explores the secret doctrines and operations of the spagyric art. He offers a large collection of recipes for spagyric herbal preparations adapted from celebrated spagyrists such as Paracelsus, Pseudo-Lull, Philipp Ulstad, Jan Baptist van Helmont, Oswald Croll, and Nicaise Le Fèvre, providing detailed step-by-step instructions for a veritable pharmacopeia of spagyric extracts, tinctures, elixirs, liquors, oils, unguents, salts, aquae vitae, and quintessences. Mavéric also shares his intricate theory of astral medicine and advocates a seasonal “Hermetic diet” designed to keep the humors of the body in equilibrium and prevent the onset of illness. In the final section of the book, Mavéric focuses on the more advanced methods and techniques of Paracelsus, Helmont, and George Starkey, unraveling the mysteries of manufacturing alkalis, alkahests, and menstrua and divulging his own secret formula for a universal circulatum.

Available now for the first time in English, this occult classic unveils the art of extracting spagyric essences to a modern audience while also bringing the science of herbal medicine back to its Hermetic roots.

Jean Mavéric: Little is known about the life of the writer behind the pseudonym Jean Mavéric except that he was a prominent figure in occult and alchemical circles in Paris in the early twentieth century. He was affiliated with Papus’s École hermétique, where he taught courses in Hermetic philosophy and astrology, and was also an active member of the Société alchimique de France, a group of practicing occultists devoted to the study and revival of alchemy. Jean Mavéric also wrote under the pseudonyms “Jean Bélus” and “Jean Petit,” the latter of which appears to corroborate occult bibliographer Albert Louis Caillet’s assertion that “Jean Mavéric” was the nom de plume of Maurice Petitjean.