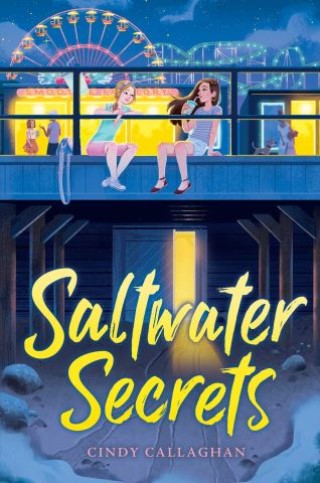 From the acclaimed author of Just Add Magic—now a hit streaming original series—comes a sweet novel about two sisters on summer vacation that explores the intricate bonds of a blended family.

Stella and Josie live for their summers at the boardwalk—each one a carbon copy of the last. Josie lives in Australia most of the year; her half-sister, Stella, lives in New Jersey. But every year, they come together for a beach vacation with their dad, and to make more memories. The real excitement for them is their secret special place under the boardwalk, where they hide their sister scrapbook, adding memories from each summer.

But this summer feels different. Josie isn’t the same—she’s turned into one of the popular girls that Stella can’t stand. Despite the rocky start to their vacation, they still go to their secret, special place under the boardwalk, adding memories to their sister scrapbook once again.

That is, until that place is discovered by the owners of the newest store—the Smoothie Factory, which replaced Josie’s favorite sweet spot. Not only have the owners of the Smoothie Factory discovered the cove, they are exploiting the natural habitat, and endangering marine life and everyone at the beach! It’s up to Josie and Stella to figure out how to stop their beloved boardwalk from disappearing for good.

Cindy Callaghan: Cindy Callaghan is the author of the middle grade novels Lost in London, Lost in Paris, Lost in Rome, Lost in Ireland (formerly titled Lucky Me), Lost in Hollywood, the award-winning Sydney Mackenzie Knocks ’Em Dead, Just Add Magic (which is now a breakout streaming original series), and its sequel Potion Problems. She lives in Wilmington, Delaware.