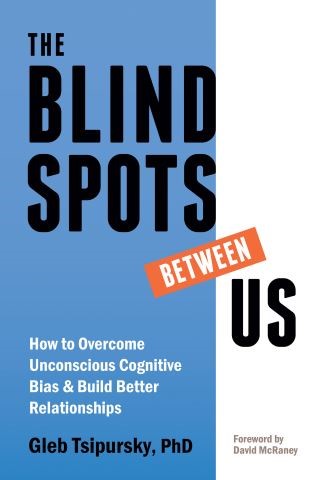 The Blindspots Between Us

How to Overcome Unconscious Cognitive Bias and Build Better Relationships

Grounded in evidence-based cognitive behavioral therapy (CBT), The Blindspots Between Us reveals the most common “hidden” biases that blind us to the truth, and which lead to misunderstandings and damaged relationships. Using this guide, readers will learn to identify their own blindspots, and move beyond them for better relationships—and a better world.

Gleb Tsipursky:
Gleb Tsipursky, PhD, is a cognitive neuroscientist and behavioral economist on a mission to protect people from relationship disasters caused by the mental blindspots known as cognitive biases through the use of cognitive behavioral therapy (CBT)-informed strategies. His expertise comes from over fifteen years in academia researching cognitive neuroscience and behavioral economics, including seven as a professor at Ohio State University, where he published dozens of peer-reviewed articles in academic journals such as Behavior and Social Issues and Journal of Social and Political Psychology. It also stems from his background of over twenty years of consulting, coaching, speaking, and training on improving relationships in business settings as CEO of Disaster Avoidance Experts.

A civic activist, Tsipursky leads Intentional Insights, a nonprofit organization popularizing the research on solving cognitive biases, and has extensive expertise on translating the research to a broad audience. His cutting-edge thought leadership was featured in over 400 articles and 350 interviews in Time, Scientific American, Psychology Today, Newsweek, The Conversation, CNBC, CBS News, NPR, and more. A best-selling author, he wrote Never Go With Your Gut, The Truth Seeker’s Handbook, and Pro Truth. He lives in Columbus, OH; and to avoid disaster in his personal life, makes sure to spend ample time with his wife.
David McRaney is an internationally best-selling author, journalist, and lecturer who created the You Are Not So Smart books and blog, which cover the psychology of reasoning, biases, delusions, and fallacies. He has appeared as himself in a national ad campaign for Reebok, and his writing has been featured in campaigns for Heineken and Duck Tape, among others. David currently hosts the You Are Not So Smart podcast, and travels around the planet giving lectures on how we are the unreliable narrators in the stories of our lives.