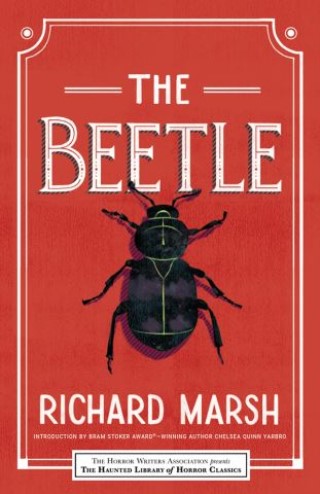 A creature that seems to have crawled out of our worst nightmares...

Meet Paul Lessingham: an up-and-coming statesman, known for his unflappable calm, winning the respect of his peers and the admiration of the people with his powerful convictions and finely crafted speeches in Parliament. A man at the height of his powers, politically and personally, recently engaged to a beautiful young woman who adores him. A man on top of the world—reduced to a cowering, sniveling heap of abject terror at the utterance of two words: "The BEETLE!"

Set in London at the end of the nineteenth century, this blood-chilling tale is told from the viewpoints of four characters who have the distinct misfortune of stumbling into a diabolical scheme of revenge, with a scorned would-be lover—a strange, seemingly magical creature—at its core. Snubbed marriage proposals, secret engagements, deadly chemical experiments, and mysterious visitors all weave their hypnotic spell upon the reader, culminating in a desperate hunt for an abducted young woman whose life, it seems, is the price to be paid for her lover's indiscretion some twenty years prior.

Though published the same year as Bram Stoker's Dracula, Richard Marsh's The Beetle was far more popular in its day. This curated edition, based on the original 1897 publication by Skeffington and Sons, London, will horrify and delight the modern reader with its timeless tale of jealousy and its many hideous faces—as relevant today as it was over 100 years ago.